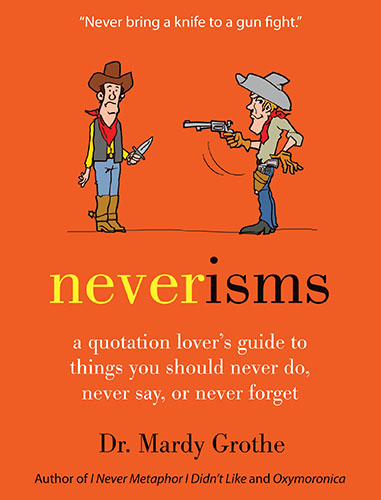 A collection of witty and wise quotations about what never to do in life. Remember, “never let the fear of striking out get in your way” (BabeRuth), "never hit anyone if you can help it, but never hit soft"(Theodore Roosevelt); "never be afraid tosit awhile and think" (Lorraine Hansberry); and, of course, neverleave home without the perfect quote for any occasion from Dr. Mardy’s Neverisms.

"Never ruin an apology with an excuse."

"Never go to a doctor whose office plants have died."

When we strongly encourage people to do something, it's called an exhortation. But what is the proper term for strongly discouraging people? One candidate is admonition. Another is dehortation, the opposite of exhortation. But perhaps the best term for an emphatic piece of dissuasive advice is neverism. You won't find the term in any dictionary (at least not yet) because quotation anthologist Dr. Mardy Grothe coined it himself for this collection of nearly two thousand quotable cautionary warnings. With the whimsical and witty intermixed with the serious and profound, contributors range from Aesop and Marcus Aurelius to John Wayne and Mae West. Grothe also tells the fascinating "back stories" of scores of classic quotations as well as the history of hundreds more that have never before appeared in a quotation anthology. Organized by topics such as Wit & Wordplay, Politics & Government, Sports, Stage & Screen, and The Literary Life, this is a book about quotations as well as a book of them. Neverisms is sure to delight quotation lovers and language aficionados everywhere.