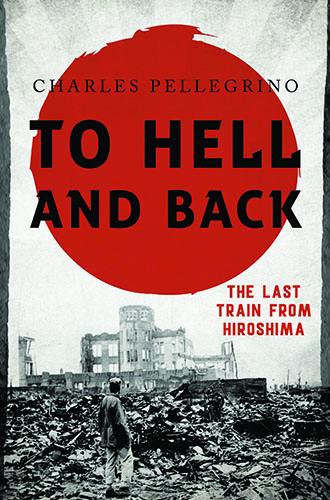 TO HELL AND BACK

The Last Train from Hiroshima

Drawing on the voices of atomic bomb survivors and the science of forensic archaeology, Charles Pellegrino describes the events and the aftermath of two days in August when nuclear devices, detonated over Japan, changed life on Earth forever.

Some of this material was originally published in 2010 by another publishing house, which pulled its book after one of Pellegrino’s sources, a U.S. Air Force veteran, was discredited. This new book focuses squarely on the A-bomb survivors and their stories to deliver a stunning, “you are there” time capsule, wrapped in elegant prose. Pellegrino’s scientific authority and close relationship with the survivors make his account the most gripping and authoritative ever written.

Author Charles Pellegrino is a scientist and the author of twenty books, including the New York Times bestseller Her Name, Titanic, and Ghosts of the Titanic. He has contributed to scientific journals in diverse fields, collaborated with scientists at Brookhaven National Laboratory, served as a scientific consultant on the Avatar film series and invented the dinosaurs-from-amber recipe for the Jurassic Park series.

“Sober and authoritative: This is gleaming, popular wartime history”

“Charles Pellegrino’s account about what it was actually like to be on the ground in both Hiroshima and Nagasaki, culled from survivors’ memories and his own work in forensic archaeology, is the most powerful and detailed I have ever read.”

“A tragic cautionary tale as well as a celebration of human resilience.”

“I have travelled with Charlie in Japan to visit survivors of both the Hiroshima and Nagasaki bombings, and to consult with officials and historians there.  Among that community he is well respected and considered an important voice for the history of these events. . . . I have renewed the option on Last Train from Hiroshima because I believe it tells the tragic story in unprecedented detail, giving voice to many new perspectives, and it will add great value to the film I plan to make on the subject."