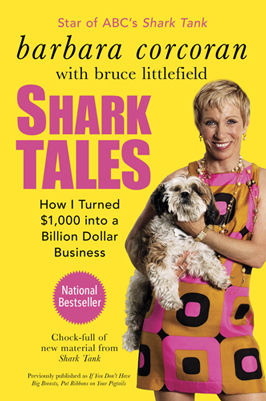 Barbara Corcoran’s credentials include straight D’s in high school and college and twenty jobs by the time she turned twenty-three.  It was her next job that would make her one of the most successful entrepreneurs in the country when she took a $1000 loan to start The Corcoran Group.  She parlayed the loan into a five-billion-dollar real estate business and sold it in 2001 for $66 million.

Barbara is the real estate contributor for NBC’s TODAY Show where she comments weekly on trends in the real estate market, and hosts “The Millionaire Broker with Barbara Corcoran”.  She’s also a Star on ABC’s reality hit Shark Tank. In the first and second season, Barbara invested in thirteen young businesses that she’s shepherding to success; in seasons 3 and 4, she invested in another 18 entrepreneurs.

Barbara’s book If You Don’t Have Big Breasts, Put Ribbons on Your Pigtails, an entertaining business book, has become a national best-seller. Her latest book, Shark Tales was the #1 business book on Amazon for a time.

She is a columnist for the New York Daily News, More Magazine, The Daily Review, and Redbook and has been featured in a wide variety of media outlets, including an appearance on CNN’s Larry King Live.

As a speaker, Barbara brings her front-line experience and infectious energy to every group she addresses.  Motivational, inspirational, and sometimes outrageous, Barbara Corcoran’s tell-it-like-it-is attitude is a refreshing approach to success.

Barbara graduated from St. Thomas Aquinas College in 1971. A native of Bridgewater, NJ, she now lives in Manhattan with her husband Bill and their two children. 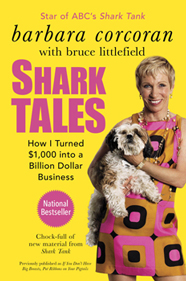 The inspiring true story of Shark Tank star Barbara Corcoran--and her best advice for anyone starting a business.

After failing at twenty-two jobs, Barbara Corcoran borrowed $1,000 from a boyfriend, quit her job as a diner waitress, and started a tiny real estate office in New York City. Using the unconventional lessons she learned from her homemaker mom, she gradually built it into a $6 billion dollar business. Now Barbara's even more famous for the no-nonsense wisdom she offers to entrepreneurs on Shark Tank, ABC's hit reality TV show. Shark Tales is down-to-earth, frank, and as heartwarming as it is smart. After reading it don't be surprised if you find yourself thinking, "If she can do it, so can I." Nothing would make Barbara happier. 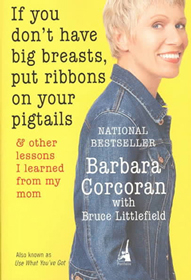 If you don't have breasts, put ribbons on your pigtails

After failing at twenty-two other jobs, Barbara Corcoran borrowed $1000 from her boyfriend, quit her job as a diner waitress, and started a tiny real estate office in New York City. Using twenty-four unconventional lessons learned from her mom, Barbara built that tiny company into a $4 billion business, and today she’s richer than her wildest childhood dreams. Barbara’s hilarious stories and her mom’s pithy advice—from "If you want to be a cheerleader, you better know the cheers" to jumping out the window will make you either an ass or a hero"—are bound to inspire greatness in any reader. This national bestseller previously titled Use What You’ve Got) will make you feel better about yourself and teach you to look at obstacles in a whole different way.

Speaks on Risk-Taking, Failure and How to Get Back Up

On innovation, redefining your goals based on your failures, and building a tight team that works hard and has fun.

Advice from the American businesswoman, investor, author, and television personality.

Shark Tales: How I Turned $1,000 into a Billion Dollar Business

If You Don't Have Big Breasts, Put Ribbons on Your Pigtails: And Other Lessons I Learned from My Mom

Shark Tales: How I Turned $1,000 into a Billion Dollar Business

“The book offers details of her dizzying rise from dyslexic D-student growing up with nine siblings in Edgewater to queen of Manhattan real estate."

“A practical, funny compendium of advice that should stick with any reader."

“For all her drive, she has no airs."

“Corcoran's humanity, humor and wisdom gently convey worthwhile lessons for those who would like to succeed on their own terms."

If You Don't Have Big Breasts, Put Ribbons on Your Pigtails: And Other Lessons I Learned from My Mom

“A like-able and worthwhile book, an honorable contribution with heart."

Advice from the American businesswoman, investor, author, and television personality.