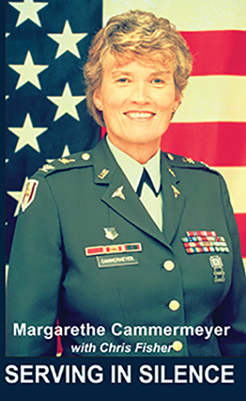 Margarethe Cammermeyer, Ph.D., RN, Colonel, USA Ret., after having served in the Army for six years on active duty and 25 years in the Army Reserves and National Guard, made history and rose to international prominence in 1989 when she challenged the military's anti-gay regulation...and won. The case sparked a national dialogue, resulting in the “Don't Ask, Don't Tell" law which allowed homosexuals to serve in the military in silence.

In 1989, during an interview for top-secret clearance, to apply for the War College, she self identified as a lesbian and chose honesty and integrity during a routine interview which resulted in her losing her military career after a distinguished 25 years of service.  Her story drew widespread attention since she was a highly decorated Vietnam veteran where she earned the Bronze Star Medal, having served 14 months in Vietnam which included eight months as head nurse of the neurosurgical intensive care unit, and was Chief Nurse of the Washington State National Guard.  Col. Cammermeyer lobbied against “Don’t Ask, Don’t Tell” for the next 17 years until its repeal on December 22, 2010 when President Obama signed the bill to repeal the ban and nine months later on September 20, 2011, the repeal of DADT was finalized.  Social justice continued as the Supreme Court ruled the Defense of Marriage Act unconstitutional in 2013.

Col. Cammermeyer's autobiography, Serving in Silence, was recognized by the National Education Association which named it "Outstanding Book of the Year" on the subject of Human Rights in North America. A made-for-television movie of the same name starring Glenn Close as Col. Cammermeyer and co-executive produced by Barbra Streisand, received three Emmy Awards and the prestigious Peabody Award.

In her multi-media program, "Breaking the Silence," Col. Cammermeyer presents a living history of LGBT rights as she interweaves her own life experiences with the legal and political struggles which contributed to social justice for homosexuals serving in the military and same sex couples to marry — all of this taking place in a span of 25 years.

Col. Cammermeyer was raised under Nazi occupation in Norway and later immigrated with her family to the United States at the age of 9.  She joined the military at 19 to give something back to her adopted country.  During her military career she also challenged policies that discriminated against married women and married women who became pregnant.  In June 2010, she was appointed and served for four years on DACOWITS (Defense Advisory Council of Women in the Services).  She continues to challenge the status quo and promote civil and human rights.

Col. Cammermeyer has a BS in Nursing from the University of Maryland and a M.A. and Ph.D. from the University of Washington, which honored her with the 2015 “Distinguished Alumni Veterans Award.” Other awards include: The 2016 “Leonard Matlovich Award” from American Veterans for Equal Rights; being inducted into the Washington State Nurses Hall of Fame in 2014;  The “Legacy Award” from the Point Foundation in 2010; the “Women Who Dared” Award from the National Council of Jewish Women in In 1999; the "Hannah Solomon Award" by the Jewish Women's League in 1995; and, the “Soldier of Freedom Award” from the Human Rights Campaign in 1993; "among others.

In 1989, U.S. Army Colonel Margarethe Cammermeyer revealed she was a lesbian; despite her distinguished 26-year military career, she was discharged from the U.S. Army. Intense media coverage gained the ear of the U. S. president, ignited her activism, and inspired the movie "Serving In Silence,"  in which she was portrayed by Glenn Close. New edition in late 2016 with Epilogue that covers through 2016.

The General Electric Company Gay, Lesbian, Bisexual, Transgender, & Ally (GLBTA) Alliance was honored to welcome Col. Margaraethe “Grethe” Cammermeyer as the keynote speaker at the October 2016 East Coast & Canada Regional Meeting.  Over 100 GE employees listened as Col. Cammermeyer described her life from childhood to adulthood, and her journey from realizing she was a lesbian to fighting for her right to serve in the U.S. Military regardless of her gender, race, religion, or sexual orientation. The feedback from our members highlighted how inspirational Col. Cammermeyer’s presentation was to the audience.  Several members communicated how moved they were by her story, and how grateful they are that she was a pioneer fighting for the GLBT rights that we enjoy today. In addition to the presentation, we arranged for a book-signing for the latest edition of Col. Cammermeyer’s book, “Serving in Silence”.  Col. Cammermeyer was kind enough to arrive early to make sure that everyone’s book was signed.  She then made herself available for additional signing, and many of the GLBTA members lined up to obtain their personalized copy. Col. Cammermeyer was gracious, professional, funny, and a pleasure to work with.  We were thrilled that she was able to participate in our event. Those who attend her address had this to say:

“The Colonel made me cry - she was amazing. GREAT guest speaker, thanks for the opportunity to hear that!”

“The Colonel was very inspiring and so down to earth. It was a pleasure to be able to meet her.”

“Loved the Colonel! She was inspirational and entertaining.” 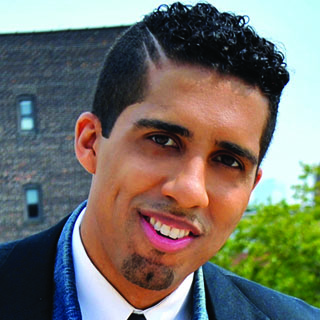