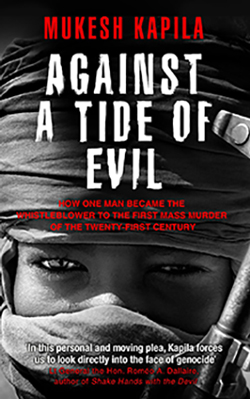 Humanitarian & Author of Against A Tide of Evil: How One Man Became the Whistleblower to the First Mass Murder of the Twenty-First Century.

Former head of UN Operations in the Sudan.

Special Representative for the Prevention of Crimes Against Humanity for the Aegis Trust in Geneva.

Mukesh Kapila, CBE is Professor of Global Health and Humanitarian Affairs at the University of Manchester. He is also Chair of Nonviolent Peaceforce, Chair of Manchester Global Foundation, Adjunct Professor at the International Centre for Humanitarian Affairs Nairobi, Associate Fellow of the Geneva Centre for Security Policy, Special Representative of the Aegis Trust for the prevention of crimes against humanity, and Special Adviser to Syria Relief. He was Special Adviser to the first-ever World Humanitarian Summit in Istanbul in May 2016.

Professor Kapila has extensive experience in the policy and practice of international development, humanitarian affairs, human rights and diplomacy, with particular expertise in tackling crimes against humanity, disaster and conflict management, human rights and global health.

His memoir "Against a Tide of Evil", published in 2013, was nominated for the Best Nonfiction Book of that year. He is the curator of a popular blog series Flesh and Blood.

Previously he was Under Secretary General at the International Federation of Red Cross and Red Crescent Societies, the world’s largest humanitarian and development network. Earlier, he served the United Nations in different roles as Special Adviser to the United Nations High Commissioner for Human Rights in Geneva and then Special Adviser at the UN Mission in Afghanistan. Subsequently, he led the UN’s largest country mission in 2003-4 as the United Nations Resident and Humanitarian Coordinator for the Sudan, and then became a Director at the World Health Organization in Geneva.

He has also been Chief Executive of the PHG Foundation, a senior policy adviser to the World Bank, worked as part of the UN Disaster Assessment and Coordination system, and advised the UN International Strategy for Disaster Reduction, International Labour Organization, UNAIDS, and many other agencies. Prior to the UN, Professor Kapila was at the UK Foreign and Commonwealth Office’s Overseas Development Administration (subsequently Department for International Development), initially as senior health and population adviser and latterly as the first head of a new Conflict and Humanitarian Affairs Department that he set up.

His earliest career was in clinical medicine, primary health care, and public health in the British National Health Service in Oxford, Cambridge, and London, where he helped set up the UK’s first national HIV and AIDS programme at the Health Education Authority, becoming its deputy director.

He has initiated several NGOs, and served on the Boards of many bodies including the UN Institute for Training and Research, and the International Peace Academy in New York. He has also been a Senior Member of Hughes Hall College at Cambridge University.

Professor Kapila was born in India and is a citizen of the United Kingdom. He has qualifications in medicine, public health, and development from the Universities of Oxford and London. In 2003, he was honoured by Queen Elizabeth II and named a Commander of the Order of the British Empire for his international service. In 2007, he received the Global Citizenship Award of the Institute for Global Leadership. In 2013, he received the "I Witness" award for his work on human rights, and honoured in 2014 with a special resolution of the California State Legislature for "lifetime achievements and meritorious service". 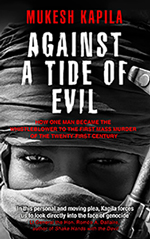 Against A Tide of Evil

In this no-holds-barred account, the former head of the United Nations in Sudan reveals for the first time the shocking depths of evil plumbed by those who designed and orchestrated 'the final solution in Darfur' and why so many good men stood by and did nothing. It is the deeply personal account of one man driven to extreme action by the unwillingness of those in power to stop mass murder. His co-author Damien Lewis is an award-winning and bestselling British author, published in 36 languages worldwide whose other powerful and compelling memoirs include the acclaimed international number one bestseller Slave, co-written with Mende Nazer. 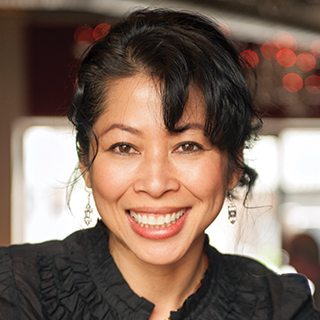