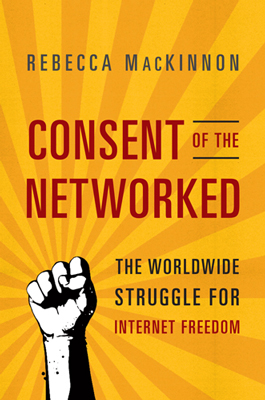 Director of the Ranking Digital Rights project at New America

Author, Consent of the Networked: The Worldwide Struggle For Internet Freedom

Rebecca MacKinnon is director at New America of the Ranking Digital Rights project whose Corporate Accountability Index  evaluates the world’s most powerful Internet, telecommunications, and other ICT sector companies on free expression and privacy criteria.

Author of Consent of the Networked: The Worldwide Struggle For Internet Freedom (Basic Books, 2012) MacKinnon is co-founder of the citizen media network Global Voices Online. She currently serves on the board of directors of the Committee to Protect Journalists and was a founding board member of the Global Network Initiative.  She is also a visiting affiliate at the Annenberg School for Communication’s Center for Global Communications Studies.

Fluent in Mandarin Chinese, MacKinnon was CNN’s Beijing Bureau Chief from 1998-2001 and Tokyo Bureau Chief from 2001-2003. Since leaving CNN in 2004 she he has held fellowships at Harvard’s Shorenstein Center on the Press and Publicy Policy, the Berkman Center for Internet and Society, the Open Society Foundations , Princeton’s Center for Information Technology Policy, and the New America Foundation.  In 2007-08 she taught online journalism and conducted research on Chinese Internet censorship at the University of Hong Kong’s Journalism and Media Studies Centre, and was a 2013 adjunct lecturer at the University of Pennsylvania Law School.  She received her AB magna cum laude from Harvard University and was a Fullbright scholar in Taiwan. 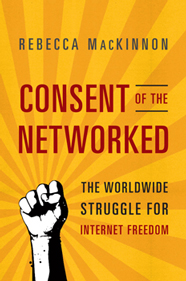 Consent of the Networked

The Internet was going to liberate us, but in truth it has not. For every story about the web's empowering role in events such as the Arab Spring, there are many more about the quiet corrosion of civil liberties by companies and governments using the same digital technologies we have come to depend upon. In Consent of the Networked, journalist and Internet policy specialist Rebecca MacKinnon argues that it is time to fight for our rights before they are sold, legislated, programmed, and engineered away. Every day, the corporate sovereigns of cyberspace (Google and Facebook, among others) make decisions that affect our physical freedom—but without our consent. Yet the traditional solution to unaccountable corporate behavior—government regulation—cannot stop the abuse of digital power on its own, and sometimes even contributes to it.  A clarion call to action, Consent of the Networked shows that it is time to stop arguing over whether the Internet empowers people, and address the urgent question of how technology should be governed to support the rights and liberties of users around the world.

Let's Take Back The Internet

“Cyber power and governance of the internet is one of the great unsolved problems of the 21st century. Rebecca MacKinnon has written a wonderfully lively and illuminating account of the issues we face in this contentious area. It is well worth reading.”

“A growing number of people throughout the world are counting on the Internet to move their countries in a more democratic direction. Consent of the Networked describes what's happening, successes and failures, what's next, and what needs to be done. It's the real deal."

“The Internet poses the most complex challenges and opportunities for human rights to have emerged over the last decade. Rebecca MacKinnon’s book is a clear-eyed guide through that complexity.”

“Consent of the Networked describes how important it's been for the Internet to develop outside of multinational organizations, with technology companies, engineering associations and civil society groups having as much influence as governments.... Applying the political-science notion of a social contract to the Web for ‘consent of the networked' is a novel approach. It recognizes that the Web is global, with an inherent ideology in favor of more transparency and greater access to information.”

“Consent of the Networked is a must-read for anyone interested in freedom of personal and political expression in the 21st century. It's accessible, engaging, and periodically hair-raising. It should have the same impact on public awareness of the vital issues surrounding Internet freedom that ‘An Inconvenient Truth' had with regard to climate change.”

“It is an absolutely indispensable account of the way that technology both serves freedom and removes it. MacKinnon is co-founder of the Global Voices project, and a director of the Global Network Initiative, and is one of the best-informed, clearest commentators on issues of networks and freedom from a truly global perspective. MacKinnon does a fantastic job of tying her theory and analysis to real-world stories.”

“Count me among those who are thoroughly convinced by MacKinnon's reporting and arguments.... In many ways, MacKinnon's book is the one Evgeny Morozov should have written, if he was more interested in building a sensible movement for Internet freedom rather than conducting scorched-earth warfare against people who believe the Internet can help strengthen democratic culture.... While Consent of the Networked offers netizens a workable roadmap to a real vision of internet freedom, the people who should most read this book aren't the already aware, but folks—especially policy-makers—who see all the shiny devices and trendy social media and foolishly assume that the Internet will ultimately prevail. It might, but only if we understand what a lucky and unusual accident the Internet really is, and that to keep it open and free, we have to fight for it.”

"Fascinating and provocative...MacKinnon forcefully and  passionately urges us to stake out our Internet rights before  governments or corporations completely take those rights away from us."

"For nearly a decade, Rebecca MacKinnon has been at the center of evolving debates about how the Internet will affect democracy, privacy, individual liberties, and the other values free societies want to defend. Here she makes a persuasive and important case that, as with other technological revolutions through history, the effects of today's new communications systems, for human liberation or for oppression, will depend not on the technologies themselves but rather on the resolve of citizens to shape the way in which they are used."

“[M]any thinkers on the information-wants-to-be-free side of the debate present the same binary choice, seeing almost any state control of the Internet, or any government attempt to protect intellectual property, or even the attempts of private social networks to get people to log in with their real names, as affronts to democracy comparable with the worst excesses of repressive regimes. Luckily, Ms. MacKinnon's analysis is more nuanced and balanced than that, and Consent of the Networked is an excellent survey of the Internet's major fault lines.”

“In her grand sweep of ‘the worldwide struggle for internet freedom', Rebecca MacKinnon alights on the many dilemmas facing policy makers and corporate chiefs, and the many threats that cyberspace poses for individual liberty....  Thoroughly researched by one of the experts in the field, the book straddles the line between an academic and general audience. Mac Kinnon entreats internet users to see themselves as active citizens—not consumers or eyeballs. She harks back to Huxley's Brave New World… [and] ends with a rallying cry.”

“Insightful and moving.... Ms. MacKinnon's stories of the effort occurring worldwide as people harness the Internet, often with a political, socioeconomic or religious motivation, are discerning, harrowing and empowering. From Egypt's record of torturing and jailing bloggers, China's system of corporate-level censorship and South Korea's strict requirements for real identification for online users, Ms. MacKinnon repeatedly strikes the appropriate balance between a technological discussion of the Net and the significance of human rights.... Packed with thorough and impeccable research and persuasive, eye-opening anecdotes from around the world, Consent of the Networked should spearhead a robust debate and join the handful of other books that successfully guide the reader through the land mines surrounding responsible use of the Internet.”

“Internet policy maven Rebecca MacKinnon warns in an important new book… that the liberating power of digital technology is under threat from corporations and governments alike.... [MacKinnon] argues that neither political action nor competitive pressure spawned by the free market will protect our rights, finally making a strong case for a third way—a nongovernmental watchdog with sufficient clout to preserve freedom on the Internet.”

“This timely, scholarly survey of global offences against ‘freedom' on the internet also points out that Facebook, Google and the like supply ‘corporate' rather than ‘public' spaces, whose users are subject to the unsophisticated moral diktats of their owners.”

“Fluent in Mandarin, MacKinnon spent nearly a decade as a CNN correspondent in Beijing, including several years as the bureau chief.... Her insight into how Western perception of the state of the Internet in China differs from the true situation on the ground is invaluable.”

“[A] sharp, sobering rebuttal [to] heady rhetoric, questioning and complicating our understandings of what it means to be free online. MacKinnon's book presents a cogent picture of the many ways in which our lives, both online and off, are increasingly affected by regulators, politicians, and companies seeking to carve territories into the still-amorphous web....  [T]he book's intention isn't to offer up a set of neat solutions, but to spur all of us to pay more attention to the threats lurking beneath the web's shiny baubles, and to exhort us to take a more active role in claiming and defending our digital power, rights, and freedoms. In that, Consent of the Networked succeeds admirably; it should be required reading for anyone who cares about the future of the web—that is, for all of us.”

“Ms. MacKinnon provides expert reporting and analysis of Internet censorship and acts against individuals by authoritarian regimes around the world including China, Iran, and Egypt, among others. Communication doesn't move in a straight line, and more often than not, it occurs outside the lines of what we many people like.... [If] you are a Google user and don't understand their recently updated privacy policy, and are tired of trying to puzzle it out, then Consent of the Networked is for you.”

“An incisive overview of the global struggle for Internet freedom.... In her wide-ranging book, MacKinnon details the many ways in which governments, corporations and others are using the Internet—from empowering people to helping authoritarian dictators survive.”

“A vitally important analysis of Internet manipulation that should be read by anyone relying on the web for work or pleasure.”

Let's Take Back The Internet