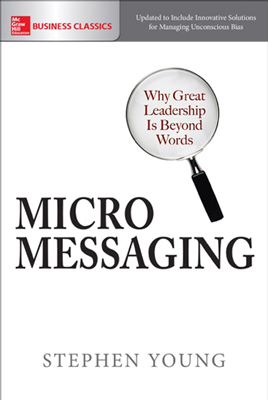 Author of Micromessaging: Why Great Leadership is Beyond Words

Stephen Young is the Senior Partner of Insight Education Systems, a management consulting firm specializing in leadership and organizational development services.  As a recognized leader and foremost expert in this field, Mr. Young frequently consults with senior executives and management teams of Fortune 500 companies.

McGraw-Hill published his top-selling book, Micromessaging: Why Great Leadership is Beyond Words. For more than a decade, Steve has been a featured speaker at business conferences worldwide. He is much sought after for his powerful and engaging presentation style.

His widely acclaimed seminar MicroInequities: The Power of Small™ has been embraced by over 20% of Fortune 500 corporations in 35 countries, in every region of the world and is being touted by corporate America as the new paradigm for diversity and leadership.

His work has been published in numerous business articles and recognized in a wide range of business publications, including The Wall Street Journal and Time Magazine and Harvard Business Review’s Management Newsletter. His program was also featured by Oprah Winfrey in two issues of her “O” Magazine.

Prior to joining JPMorgan Chase, Stephen was Vice President for Diversity with Merrill Lynch. He is a former staff member of the Rutgers University Graduate School of Management, has served on the Diversity Committee for the United Way of America and as an Advisory Board member to the Rev. Jesse Jackson’s Wall Street Project. He is the former Chairman of the Securities Industry Association’s Diversity Committee, and Board member of Scholastic’s Alliance for Young Writers and Artists. Additionally, he served on his local Board of Education. 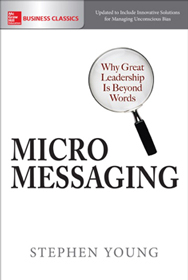 Should you sweat the small stuff?  Absolutely, says Stephen Young-especially when it comes to those critical behaviors that can make or break performance. The reason is simple: no matter what you think you're saying, your words, gestures, and tone of voice can actually communicate something entirely different.  Too often, negative micromessages undermine morale, business opportunities, and ultimately your organization. Micromessaging examines the nuanced behaviors that we all blindly use and react to in our dealings with others. Yet as Young points out, these micromessages can reveal a lot about our own-and our superiors'-biases and re-conceived notions. Learning how to constructively address these behaviors can bring about positive change.

Young offers a common language for encouraging open discussion in the workplace, along with skills to identify and address familiar micromessages; tools for deploying microadvantages; and real-life workplace scenarios, self-assessments, and solutions that help readers interpret and alter ingrained behaviors and their effects. Based on research from MIT, Young's approach has already helped numerous Fortune 500 clients, including Merck, Intel, Lockheed Martin, Starbucks, IBM, Boeing, Wells Fargo, Bank of America, Cisco, and Raytheon to increase leadership effectiveness. With its proven wisdom, you can experience what so many business executives worldwide have discovered and make it a powerful part of your leadership skill set.

Stephen Young on MicroInequities: The Power of Small™

How They are Made Visible, Controlled and Managed

Stephen Young on MicroInequities: The Power of Small™