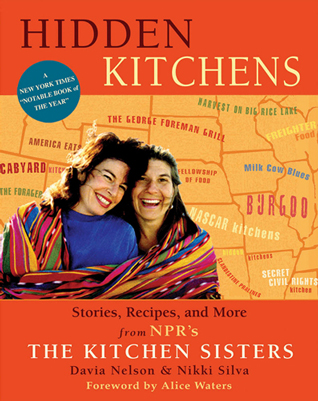 Producers of the award-winning NPR series: "Hidden Kitchens," their podcast, "The Kitchen Sisters Present…" (among others).

The Kitchen Sisters (Davia Nelson & Nikki Silva) have been creating radio documentaries together for three decades. Their award winning stories about little known histories, cultures and communities are heard on NPR’s All Things Considered.  They are the producers of the James Beard and duPont-Columbia Award-winning series, Hidden Kitchens heard on NPR’s Morning Edition and two Peabody Award-winning NPR series, Lost & Found Sound and The Sonic Memorial Project. Hidden Kitchens is a deeply layered series about the transformative power of food. Their first book, Hidden Kitchens: Stories, Recipes & More, a James Beard Award nomination and a New York Times Notable Book of the Year. Their latest NPR Special, Hidden Kitchens World was hosted by Frances McDormand. They won a 2017 Webby Award for their Radiotopia podcast The Kitchen Sisters Present and on the same day were honored with a 2017 James Beard Foundation Award (the Oscars of food) for their NPR series Hidden Kitchens: War and Peace and Food, heard on Morning Edition.

The Kitchens Sisters also produce The Hidden World of Girls {Girls and the Women They Become} a series heard on NPR, with a special hosted by Tina Fey. Stories of coming of age, rituals and rights of passage, secret identities.  Women who crossed a line, broke a trail, changed the tide. Their podcast, The Kitchen Sisters Present… is part of the Radiotopia network from PRX.

The Kitchen Sisters multimedia presentations have the feel of a journey, of culture, history and story told in surprising and artful ways that evoke a powerful sense of place and community, and that bring audiences in to the storytelling process.

Along with their radio stories and book, The Kitchen Sisters’ Interviewing, Podcasting and Recording Workshops which they have done around the world and customize for each organization and for their onstage multimedia talks and presentations on an array of topics including food, women and girls, preservation, sound, history, the art of storytelling, and team building.

They are currently working on another season of Hidden Kitchens: War and Peace and Food for NPR’s Morning Edition, and The Keepers, a new NPR series about the keepers of culture: archivists, librarians, collectors, historians and curators, along with their second book and their first Broadway musical.

Inside the World of Secret, Unexpected, Below the Radar Cooking, Legendary Meals and Eating Traditions.
How Communities Come Together Through Food.

Based on The Kitchen Sister’s “Hidden Kitchens”  duPont-Columbia and James Beard Award winning radio series heard on NPR’s Morning Edition, Davia and Nikki’s much-celebrated multimedia presentation features excerpts from the series that explores the world of secret, unexpected, below the radar cooking, legendary meals and eating traditions — how communities come together through food. The presentation features radio kitchens from around the world and The Kitchen Sisters telling stories from the road and sharing kitchen secrets and magic.  Hidden Kitchens travels the globe chronicling kitchen cultures, past and present. They are also available with “Hidden Kitchens: War & Peace & Food,”  based on their latest season James Beard Award-winning NPR series, which explores the role of food in resolving or creating conflict around the world.  Sound-rich, deeply layered stories of the people who glue their community together through food from around the world — told in unexpected voices by unexpected tellers, these unusual  and evocative stories bring the audience in to little known worlds and rituals of food.

THE HIDDEN WORLD OF GIRLS:

Global Stories About the Hidden and Little Known World of Girls and the Women They Become.

Based on The Kitchen Sisters’ NPR series ”The Hidden World of Girls, Davia and Nikki present a lively multimedia program that shares a moving and powerful collection of global stories about the hidden and little known world of girls and the women they become.  Stories of coming of age, rituals and rites of passage, secret identities — of women who crossed a line, blazed a trail, changed the tide. …  Stories from the middle of the city, to the middle of nowhere.  Stories full of ritual, secrets and tradition. The Sisters play excerpts of their sound-rich stories, tell stories from the field and bring the audience in to the story telling process soliciting their stories as well.   Visaul storytelling and the best of audio storytelling, their close listening brings audiences into unknown worlds of funny, heartbreaking and inspiring stories of women and girls around the globe.  Visit the Hidden World of Girls blog  Hidden World of Girls on Facebook  and Hidden World of Girls: Stories for Orchestra.

CLOSE LISTENING: The Art and Craft of Creative Storytelling

What makes a powerful story, a good interview, a meaningful documentary? After all that research and recording, what next?

This program explores the art and craft of creating compelling stories, oral histories, writings, multi-media productions, family and community chronicles and more. Of how to branch out in your work, in your community, and how to begin thinking about new forms of storytelling.

Through “close listening” Davia and Nikki explore common problems and effective techniques —how to come up with an idea and pursue it, how to make your interviewee comfortable, interviewing and miking techniques, how to frame evocative questions, how to listen (which is harder than it sounds), and how to organize your material and imagine creative ways to use it— from ebooks, blogs and apps, to walking tours and community projects.

This multimedia talk will explore the art of storytelling and the deep poetry of everday language forged from hours of interviews.   Rich sound, feel and a look for the series that adds dimension and color to stories being told.  The Sisters share their legendary 12 Commandments of Storytelling.   A new texture of storytelling that ecompasses the soundtracks and secret stories of peoples life.

Davia and Nikki also explores the stories behind some of The Kitchen Sisters stories—of tracking down and documenting 17 women who worked in the 1950s and 60s at WHER—“The First All Girl Radio Station in the Nation”; of the nation-wide quest for Hidden Kitchens and how families and communities come together through food; of the challenges and issues of gathering personal stories for The Hidden World of Girls series.

Some of their awards include: 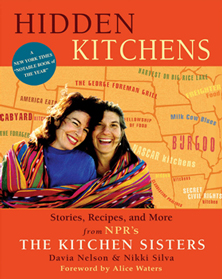 Inspired by the popular, award winning radio series on NPR's Morning Edition, Hidden Kitchens explores the world of secret, unexpected, below-the-radar community cooking across America: a midnight cab yard kitchen on the streets of San Francisco, a secret civil rights kitchen tucked away in a house in Montgomery, freighter food from the galleys of the Great Lakes, the most unexpected hidden kitchen of the homeless - the George Foreman grill. The Kitchen Sisters travel the nation in search of unsung kitchen heros, legendary meals, and cooking rituals in this wild, poignant chronicle of American life through food.

See More
The Kitchen Sisters — This is Radio

"We say our microphone is a divining rod. It's a Geiger counter. It's a stethoscope..." —Davia Nelson, The Kitchen Sisters.

The Kitchen Sisters present the story of Curtis “Wall Street” Carol, a prison inmate who invests in stocks from inside San Quentin prison.

The Kitchen Sisters — This is Radio

"We say our microphone is a divining rod. It's a Geiger counter. It's a stethoscope..." —Davia Nelson, The Kitchen Sisters. 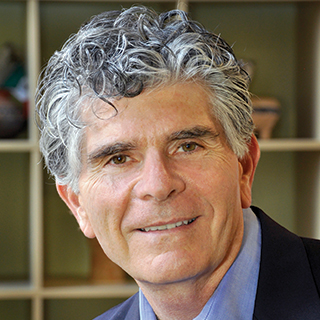