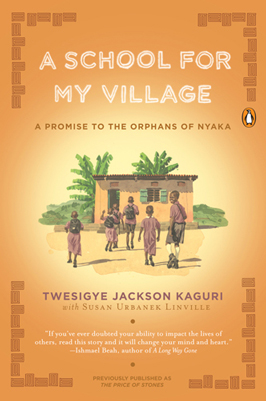 Author, A School for My Village: A Promise to the Orphans of Nyaka

“POWER OF ONE — He started out just building a school. Then Twesigye Kaguri discovered it takes children to raise a village.”

Twesigye Jackson Kaguri defied many naysayers—and his own doubts—as he and a small group of supporters followed his dream to build, stone by stone at times, a school for AIDS orphans in his village in Uganda.

Growing up in southwestern Uganda on his family’s small farm, working long hours for his taskmaster father, Kaguri was fortunate that his parents were able to scrape together his tuition and school fees. He excelled, won a place at the national university, and became a visiting scholar in the Human Rights Advocacy Program at Columbia University in New York. When he returned to Uganda with his wife, they were overwhelmed by the many people lined up outside his family’s door to ask for help, many struggling to raise the children of relatives who had died of AIDS. Having lost a sister and brother to HIV/AIDS, and as the guardian of their four children, Jackson impulsively vowed to open the first tuition-free school for orphans. Seeing the line at his parents’ door, he wondered, “What about the children with no uncle? Who will take care of them?” It was that day he decided he must help.

A graduate student and newlywed living in the United States, Kaguri chose to face almost insurmountable obstacles: little money; the opposition of his father and many villagers to a school for children who are often shunned because of the disease that claimed their parents’ lives; the skepticism of many about donating money to projects in Africa; the corruption of school inspectors; and the overwhelming needs of the children. Yet Jackson doggedly built one schoolroom at a time with the aid of many supporters in Uganda, America, and Canada, and with the sustenance of his faith.

Twesigye Jackson Kaguri shares the stirring story behind the founding of the Nyaka AIDS Orphans School. Weaving together tales from his youth with the inspiring account of building the school, Kaguri shows how one person with little more than an idea and a passion to help is capable of achieving monumental results. With remarkable determination, Kaguri has pursued a seemingly impossible dream and in the process has transformed many lives, including his own.

Kaguri’s organization has thus far built two primary schools (grades 1 to 7) serving 417 students, 53% of whom are girls. His organization’s holistic approach not only provides a free education, but also two meals a day, health care and health education for the students and their families, and a clean water system. They also constructed and run a community library and a five room clinic which doubled available medical care.

Kaguri’s A School for My Village (Penguin) was previously published as The Price of Stones (Viking). 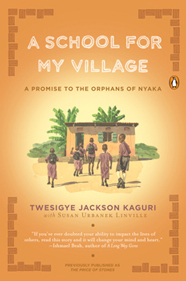 A School For My Village: A Promise to the Orphans of Nyaka

Can one person really make a difference in the world? Twesigye Jackson Kaguri overcame tremendous odds as he followed his dream to build a school for AIDS orphans in his village in Uganda. This is his unforgettable story. Growing up on his family's small farm, Kaguri worked many hours each day for his taskmaster father, though he was lucky his parents were able to send him to school. Kaguri eventually became a visiting scholar at Columbia University. Returning to his home years later, he was overwhelmed by the plight of AIDS orphans and vowed to build them a tuition-free school. A School for My Village weaves together tales from Kaguri's youth and his inspiring account of building the school and changing the lives of many children.

See More
Twesigye 'Jackson' Kaguri: A School for My Village

A Caring For The World Films Documentary Trailer

A School for My Village

As the Cal Poly San Luis Obispo commencement speaker for fall 2016, Jackson Kaguri spoke from the heart and compelled listeners to act selflessly in the name of education. His story and his call to action brought a spellbound audience to their feet in wild applause for the message he delivered. His message is one of hope that the next generation will continue to improve lives and communities through the eradication of poverty, hunger and disease. Jackson is truly a testament to the courageousness of one individual’s determination to change the world.

The Price of Stones: Building a School for My Village

“The Price of Stones is an inspiring account of turning tragedy into hope for others.”

“If you have ever doubted your ability to impact the lives of others, read this story and it will change your mind and heart.”

“Many Americans feel disconnected from the AIDS pandemic occurring on a continent so far away. Twesigye Jackson Kaguri, in his inspirational book, The Price of Stones, shortens that distance, making the effects of this disease personal by giving names and faces to AIDS orphans.  But more significantly, many of Uganda's discarded children have been given hope and, even more important, love as students at the Nyaka AIDS Orphans School. Twisgye Jackson's life illustrates beautifully that one person can make a difference.

Ron Hall, co-author of Same Kind of Different as Me

“By page 23, I was hooked. By page 33, I had tears in my eyes, the first of many times as I read this impassioned account of one man’s humble yet courageous efforts in confronting the grim legacy of the ruthless serial killer, AIDS, in his Ugandan village. If The Price of Stones doesn’t break your heart over the plight of AIDS orphans in Africa, see a cardiologist immediately. You may need a transplant.”

Lynn Vincent, New York Times best-selling writer of Same Kind of Different as Me and Going Rogue: An American Life

"By creating a school for AIDS orphans in a remote region of southwestern Uganda, Twesigye Jackson Kaguri answered the question, 'And who is my neighbor?'  By telling his story with clarity and passion, he makes his neighbors ours as well."

“This book shows that you can buy stability and hope at the price of stones. Immensely inspiring.”

“This book is a testament to the power of faith and the will to make a difference. Transforming dreams to reality, Twesigye Jackson has found himself to be a man of compassion and empowers us all to be compassionate, too. A fantastic read—enlightening, enlivening, and inspiring.”

A School For My Village: A Promise to the Orphans of Nyaka

“Written in simple, straightforward style, the book is an affecting and accessible tribute to the difference one person can make in the world."

“His story is an uplifting testament to the belief that one motivated individual can accomplish much, even when others have given up before even trying."

A School for My Village