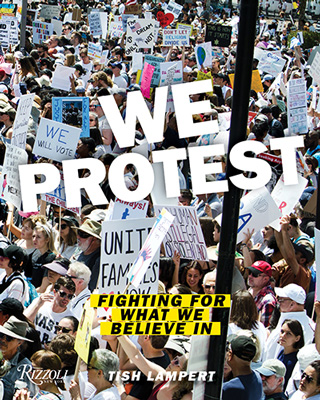 A call to action--inspiring citizens to stand up and fight for social justice in our nation.

A call to action--inspiring citizens to stand up and fight for social justice in our nation.

In the last few years we have seen a wave of activism wash across our nation and inspire unprecedented protest and civic engagement. People came together in record-breaking numbers, outspoken and persistent. With the winds of resistance at their backs, people linked arms and set out to defend our freedoms and each other.

Photojournalist Tish Lampert captures the spirit of the heroes and ordinary citizens on their activist journey to defend their American values during the most conflicted era in our recent history. The book charts the chronology of social-change movements that have dominated the headlines over the past several years: the fight for women's rights and gender equality, immigration rights, civil liberties, gun violence, and the environment. Lampert takes us to the front lines of activism, where she has documented each protest and their respective leaders, as well as the legions of ordinary Americans standing together to protect the values of our great nation.

The foreword is written by David K. Shipler, a former New York Times correspondent in New York, Saigon, Moscow, Jerusalem, and Washington, is the author of seven books, including Freedom of Speech: Mightier Than the Sword, and the best sellers Russia: Broken Idols, Solemn Dreams, and The Working Poor: Invisible in America. His book Arab and Jew: Wounded Spirits in a Promised Land, won the Pulitzer Prize in 1987.

"Images of the history of the civil rights movement viewed by generations yet unborn is a vital contribution to the growth of our nation. For us to not know our history is to leave us eternally vulnerable to repeating the horrors we have in the past created. Equally important is to see the human diversity that went into overcoming the forces that sought to deny our common humanity. This collection, We Protest Fighting For What We Believe In, is a gift that should be in everyone’s possession so as to help us understand the courage it took to overcome those forces that fuel our capacity to constantly self-destruct.”

“One of us can be dismissed. Two of us can be ignored. But together we are a movement and we are unstoppable."

"Let us continue to honor what is so beautiful about being feminine. We are mothers, we are caregivers, we are artists, we are activists, we are entrepreneurs, we are doctors, we are leaders of industry and technology. Our potential is unlimited. We will not allow our bodies to be controlled by men in government or men anywhere for that matter.”

"Through Tish Lampert’s We Protest:  Fighting for What We Believe In is Protecting The America We Believe In, with a clear reflection of who we are, who we can become, and a powerful reminder that basic human rights are not given by the gracious hand of any state that must be protected therein."

“We Protest” is a graphic reminder of the vigilance required from each of us to ensure that our democracy remains vital. Hers is a call to action that we exercise our rights as citizens, and our responsibility as Americans to make our voices heard.

"WE PROTEST is a powerful book that I am sure will move a lot of people. It is an important reminder that there are tremendous numbers of Americans who care deeply about our country and critical issues that we as a society can address. It’s a great shot in the arm to lift the spirit of those who come together to keep our Democracy alive."

"America was founded on protest. Protest is literally part of our DNA, and in a moment when justice, freedom and democracy themselves are imperiled, remembering “the right of the people peaceably to assemble, and to petition the Government for a redress of grievances” seems more important now than at any time in the last 50 years. Tish Lampert has captured what “fighting for what we believe in” in America looks like, in her timeless, yet eminently timely and beautiful book, “We Protest.”

"We Protest..." shows us the power of community and ensures that those who have been frontline peace and justice builders will inspire us in the present and shape future commitments  with their eloquent, multifaceted, and brave truths. There is nothing more important. These insightful and beautiful images tear the apathy away and compel us to stretch upward and be better upstanders.

“One of the things that is great about this book is that it carries you along in a universe of hope and commitment to the highest ideals of the nation. The photographs are so powerful, the faces are so moving. It’s a Remarkable history of this time, something that you will keep forever and show your children and grandchildren down to generations. It really crystalizes the moment.”

Tish Lampert’s We Protest inspires. Its subtitle is FIGHTING FOR WHAT WE BELIEVE IN, and the inspiring pictures of caring faces coupled with insightful words express a beautiful spirit behind the "fight".  Enrique Morones statement, "Love is an action, not just a word," captures aptly the message of this unique book which is an invitation to join together for justice, peace, and, for the boldest word of all, for love.