David A. Wilson is an entrepreneur, filmmaker, and the founder of theGrio, the largest and most influential African-American digital and cable news platform. He is also co-founder of AFAR Ventures, a market-entry and research firm dedicated to creating corporate and entrepreneurial opportunities for Blacks in Latin America.

He served as the SVP of BET Digital and Studios and is the co-founder of theGrio.com, one of the largest digital news platform focused on stories and perspectives that affects and reflects African-Americans. He and his partners launched theGrio in June of 2009 and sold it to NBCUniversal in August 2010. However, in 2014 they reacquired the site from the media giant and in less than one year doubled its traffic to reach over 5 million unique visitors monthly. He sold the company yet again in 2016 to black media mogul, Byron Allen.

Wilson co-directed and wrote MSNBC's 2008 critically acclaimed and award-winning documentary, "Meeting David Wilson." The film chronicled his journey to find answers to today's racial disparities in America and his encounter with a descendant of his family's former slaveowners, also named David Wilson.

Wilson has an extensive background in video and news production. He served as lead producer and overlooked newsroom operations for NNS (Network News Service) a national news gathering service and an ABC, CBS, and Fox News conglomerate.  Prior to working at NNS, David worked at King World Productions, where he helped launch a new talk show that was syndicated in over 85% of America's television markets.

He began his career in national broadcast television at the CBS News magazine show "48 Hours" where he researched and developed content for the program. David broke into the news business at WABC-TV in New York and later WAFF-TV an NBC affiliate in Huntsville, AL, where he produced and occasionally reported on the field. In 1998 David produced the documentary "Hidden Heroes: African-American Women in World War II," which has been inducted in Arlington's National Memorial.

David A. Wilson is a 1999 graduate of Rowan University with a B.A. in communication radio/TV/film. He was born and raised in Newark, N.J. but currently lives between Los Angeles, CA and Salvador, Bahia, Brazil.

About the Documentary "Meeting David Wilson"

David A. Wilson wrote, co-directed and was the subject of the award-winning documentary film "Meeting David Wilson," which chronicled his journey through his family's past to find answers to America's racial divide. David learned of a plantation in North Carolina where his family was once enslaved, and subsequently discovered that the plantation is owned today by a 62-year-old white man -- also named David Wilson -- who is a direct descendant of his family's former enslavers.  This leads to a momentous encounter between these two men who share the same name, but whose ancestors were on the opposite sides of freedom, when they engage in a difficult yet candid exchange about race in America.

How to Talk About Race Without Starting A Riot
A Lecture, Film Screening & Conversation

From Michael Brown, Freddie Gray, Eric Garner, Sandra Bland, George Floyd, Breonna Taylor to Donald Trump, reparations and the disproportionate impact of COVID-19, race continues to remain at the center of our national dialogue. Yet for all the discussions we have had throughout recent history, nothing ever seems resolved. As founder and former Executive Editor of theGrio.com, one of the largest and most influential African-American news portals, David has been on the frontline of covering all of these stories and debates. His personal and professional experience gives him insight into where the discussion traditionally breaks down and how we can reconcile our differences.

During his lecture, David shows pivotal moments from the film, including his conversations with the white David Wilson. In a moment when critical race theory has become a political wedge issue, David offers a blueprint for how Americans can engage each other with civility and respect and find common ground when discussing the nation's most divisive history.  The discussion includes the state of race relations today, how we got here, where we're headed and, more importantly, how we can all play a part in the solution.

A full screening of the 90-minute documentary film may also be scheduled.

“It was my good fortune to hear David Wilson present “How to Talk About Race” at the 2016 National Conference on Race & Ethnicity (NCORE). He has a story to tell and does so with great oratorical skill. Within a nation where talk of race is deferred indefinitely, or when addressed is a volatile matter, David has a voice that is urgent but not loud. His program provides the tools for us to have the critical dialogue which most often remains illusive, but is essential for us to have.”

"You deserve, and will get, a more full follow-up soon. During the interim, please know you rocked the house in all the right ways. I've received so many thank-yous from staff in appreciation of your workshop, many of whom I don't recall ever catching a note of thanks from before!"  Received following a virtual workshop on How to Talk About Race presented to Admissions and Financial Aid staff in October, 2020. 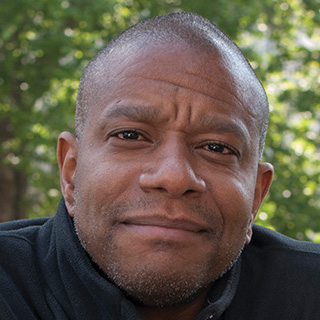